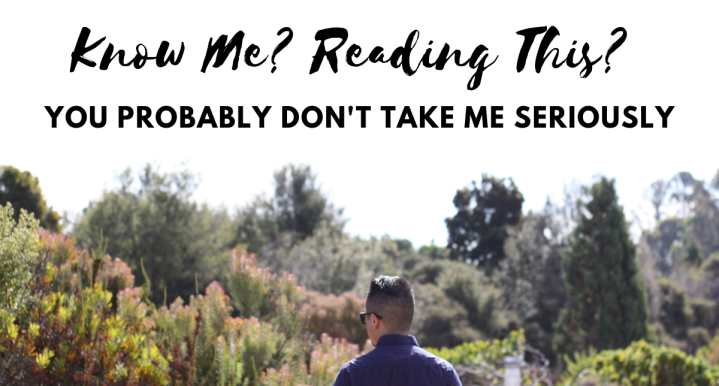 Whenever I write something, anything, I know deep down inside the only people who’ll actually open and read it are either awesome and supportive people, folks who don’t know me very well, or people who want to amuse themselves.

How do I know this? Because quite frankly, I was the same way. It wasn’t until a few months ago where I learned that being negative about the success of others only hurts me as well.

Given this reality, let me tell you three tips that you’ll probably find helpful when you develop and “publicize your passion.”

1. Your Audience Will NEVER Be Those Who Know You

Moral of the story (relating to this article):

people who have known you before your passion won’t take you seriously.

Little brother Harry will always be “Little bro Harry”. Not, “Harrison Ford, the A-list actor from Star Wars (not based on actual evidence, just an analogy).

So what does this mean for you and me?

I don’t ever write for people I know directly. My ideas and thoughts are for me, and someday, someone else who will feel that it brings a sense of value to their lives.

When you write, write something that would have brought YOU value five, ten, fifteen years ago, or heck, even a week ago. Those who were indeed looking for inspiration, value, or entertainment (whatever your intention is) will find your ideas and enjoy them, hopefully.

2. Completely IGNORE What They Think

I NEVER allow anyone I personally know to engage with any kind of social media with me that relates to my blogs. The opinions that hurt me the most are the opinions of those I’m closest to.

I love my younger brothers, but for some reason, their opinions tend to stick with me the most. Their critique has more power over me than anyone else even though they’re younger than me and I changed their diapers.

The opinions you should be looking out for are from those who actually consume and take value from it. These are the people who want to actually want to see you get better and will provide a level of feedback that would help you rather than put you down.

3. Live Your Passion and Be TREMENDOUSLY Grateful for the Supporters

In a world where stepping on throats to get to the top is praised by society (excuse my harsh analogy), having supporters may seem like a dime-a-dozen.

Believe it or not, there are folks who will be there to support you every step of the way through with showers of encouragement and compliments.

Best of all, they TRY to ensure your success with mentorship and guidance.

Love those who support you.

Be grateful to them and make sure they know that. Maybe you too will someday be that person to help others in their own passions.

This site uses Akismet to reduce spam. Learn how your comment data is processed.

I wish I'd had the courage to live
a life true to myself,
not the life others expected of me.

An Awkward Introvert's Guide to Human Connection: By a recovering shy, awkward introvert

Avaliable to listen on